Frost still lingers on my lawn as I write this winter forecast on the last day of the meteorological autumn. Last night’s minimum was -6.1C, the coldest night this year and, indeed, colder than any night last winter.

It would be very easy to get caught up in the hysteria that happens every November of what the winter will bring. Most of the hysteria comes from ‘coldies’, those folk that hope every winter will be the coldest and snowiest on record. I count myself among them.

But, despite hints from BBC weather forecasters that something maybe afoot in terms of something colder than usual from mid-December, years of disappointment have taught me to just take winter as it comes. Meteorological models this morning look anomalously warm for the first half of December, the UK being on the warm side of an anticyclone centred over France – the theme of so many winters I can remember.

The current phases of ENSO and QBO suggest that their influence on our winter this year will be far less marked than last year. Looking at teleconnections with a slight La Nina and the current QBO cycle have revealed winters that were fairly uninspiring though by no means write-offs for snow, two examples in the case of QBO being 1985/86 and 1990/91 – both had very cold Februaries.

Before I got too bogged down with trying to find patterns here I decided to move on to my more traditional pattern-matching.

Before I trawled through the figures my initial gut reaction to this winter was that it would be the coldest for at least four years – a not-too-difficult feat giving the mildness of the last three winters which saw very little in the way of snow.

The overall mean temperature for December, January and February came out at as 4.2C – 1.2C colder than the 1981-2010 average, with average precipitation.

A rather cold winter, over three months doesn’t tell you much. A very mild and stormy December could mask a dry and notably cold February. This makes it worth looking at the individual months of each winter.

There is a lot of spread in the above tables. Considering them altogether I would guess winter will unfold in the following way:

December to start mild, possibly becoming very mild, before beginning to turn very cold mid-month. This pattern will persist, with varying intensity through into January which could also be very cold. Milder conditions to follow in February though this will probably end a fairly average month and drier after a slightly wetter than average December and average January.

You can read the method of how I reached my conclusion here. 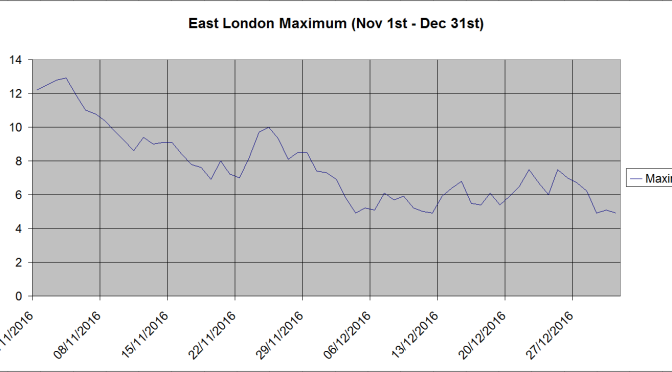 The Met Office’s latest outlook for a relatively high chance of cold weather in the early part of winter has set the internet abuzz with talk that the UK is about to experience its coldest winter in years.

The 3-month outlook, produced by the agency for contingency planners, states:

THe ‘30% chance’ for temperatures to be in the coldest of five categories is more significant than it would appear: in this three-year period of mild winters that figure usually hovers far lower.

The forecast has drawn obvious comparisons with their 2009 ‘barbecue summer’ f0recast but the GloSea5 model has made infinite advances on the old one.

The Met Office’s method, which includes a combination of data such as QBO, ENSO and ground based observations also agrees with my own method of finding local October singularities back to 1797. This month I found that an average or cold November is most likely: average and cold are both 30 per cent probability. Rather cold and severe are both 20%! There appears no chance of anything mild.

So, we can look forward to ‘a reduction in the normal westerly flow across the UK from the Atlantic, with a greater frequency of northerly or easterly winds’.

But what does this mean for the London area? If the near continent is not cold enough northerly and easterly winds could just bring a succession of cold rain in the form of showers off the North Sea with a higher than average frequency of frosty nights: nothing out of the ordinary for a slightly cooler than average November.

To try and second guess proceedings into December I decided to plot all year singularities to find when the cold spells would most likely fall and how severe they could be.

The results for November look unexciting: the coldest day is likely to be around the 19th with a maximum of 6.9C. The best chance for something cold looks to be in December, around 6th to the 11th – but there again highs of 3C or 4C would mean that any snow would be short lived. There appears to be a warm up in time to scotch hopes of a white Christmas before another cool down toward new year.

So, in conclusion, late autumn / early winter is likely to be a lot colder than the past three years. It is perhaps this fact, together with frosty mornings being common, that will make the season feel colder than it actually is.

I will be publishing my usual winter forecast on December 1st.

October 2016 was yet another dry month, a pattern that has emerged since the middle of June. Just 52 per cent of the October average was recorded.

The monthly mean finished 11.5C, 0.3C above average and ending a three-month run of warm temperatures.

Some 105 hours of sunshine were recorded, 98 per cent of average

So what has November got in store weatherwise? The models on the 1st suggest an anticyclone anchored to our west over the Atlantic will bring a regime of, at times, chilly northerly winds and the potential for rainfall, much probably in the form of showers, driven by low pressure in the North Sea. Where skies clear at night there will be potential for the first air frosts of the autumn.

Beyond the grasp of the models my long range outlook method suggests an average or cold month is most likely: average and cold are both 30 per cent probability. Rather cold and severe are both 20%! There appears no chance of anything mild.

Rainfall appears that it will be skewed toward something above average at 40 per cent, though average and below average are both 30 per cent.

Here follows the full weather diary for October…Full stats for the month here:http://1drv.ms/1rSfT7Y

1st: Rainy start with showery bursts to 11.25am then through afternoon mostly cloudy.
2nd: Sunny but chilly, feeling very autumnal. Clearing into the evening with a cold night to follow.
3rd: Sunny, gin clear all day until 2.08pm.
4th: Another sunny albeit slightly hazy start then patchy cumulus. Warm in the sunshine even with a easterly breeze.
5th: Sunny start though breezy and with quite a few cumulus around. Cloud streets observed at 10.30am, the cloud tending to decrease and completely melt away by 4pm.
6th: Sunny start but with much cloudier spells at times. Warm in the shelter.
7th: Cloudy all day, the cloud thick enough at lunch time for drizzle that damped the ground.
8th: Cloudy with bursts of light drizzle in the morning, some brightness. A heavy shower at 2pm was brief then cloudy. Clear and cold overnight.
9th: Sunny until 2pm with patchy cumulus – a really glorious morning. Sunny spells in afternoon with cold night to follow.
10th: Sunny with just patchy cirrus first thing. Thick patches of alto-cumulus drifted across from time to time. Cold overnight.
11th: Sunny with patchy cumulus which melted away through the day. Showers after dark, one at 2330z.
12th: Cloudy and damp start. Short, sharp shower at noon then mostly cloudy.
13th: Rainy , wet start thanks to a streamer of moderate to heavy showers.
14th: Cloudy am but with lots of sunshine mid-morning before clouding over again though staying bright.
15th: Bright start but with lots of cloud pushing in and light burst of drizzle at noon. Cloud thickened before rain moved in after 5pm and fell intermittently through the night.
16th: Damp start as the remnants of the overnight rain cleared away, then becoming brighter at 11.15am. Sunny spells for a time before turning cloudier with some very sharp showers on yet another convergence line.
17th: Cloudy start but soon brightening up with some pleasant sunny spells. Heavy burst of rainfall at 5.30pm with more showers at midnight and early hours.
18th: Cloudy though quickly turning bright and breezy with long sunny spells after clearance of the cold front.
19th: Bright start though more cloud around than sun all day. Feeling colder than of late.
20th: Bright and breezy with variable cloud and sunny spells. A short shower at 2pm damped the ground. Clear spells overnight made it chilly. A shower at 9.30am.
21st: Cloudy and chily start.
22nd: Cloudy and cold start, brief clearance at 11am then sunny spells.
23rd: Sunny and clear to start though cold. Sunny spells into the afternoon. Cloudy overnight.
24th: Cloudy and cool during the day and overnight.
25th: Dull and cloudy with only limited brightness. Clear early evening with temp falling before it turned misty. Cloud pushed in raising the temperature.
26th: Cloudy start and turning very dull before bright spells spread in at noon.
27th: Cloudy though getting brighter through the morning with a brief clearance at noon, then bright and sunny intervals.
28th: Sunny and very mild to start. Sunny spells through the day.
29th: Cloudy start with bright intervals after midday. Clear spells after dark with fog forming after 11pm which gave a foggy start.
30th: Foggy start then cloudy and miserable.
31st: Fog to start then clearing at 11am. Gorgeous sunny day thereafter.