Over the past few days there has been a lot of speculation on the possibility of a sudden stratospheric warming event happening. These events can contribute to unseasonably cold snaps in winter though exactly where their effects happen on the globe is impossible to forecast at small scale resolution. 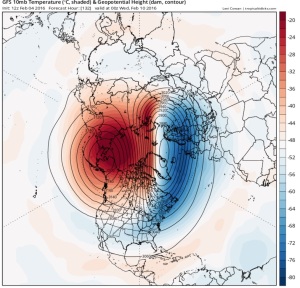 In short it looks like the eastern US is most likely to see any severe cold weather from this episode – what seems to happen a lot in recent winters in the UK.

Far from being an expert on this there was a very good posting on the usenet forum uk.sci.weather by Stephen Davenport.

“As far as the stratospheric warming is concerned, we’ve been keeping track of this for the last 1-2 weeks. Models have recently been consistent on this being a strong warming (10hPa 60-90 deg N zonal temperatures rising above 240K – see http://acdb-ext.gsfc.nasa.gov/Data_services/met/metdata/annual/merra/t60_90n_10_2015_merra.pdf).

“A temporary wind reversal is likely in the upper stratosphere; for example, see ECMWF at http://www.geo.fu-berlin.de/en/met/ag/strat/produkte/winterdiagnostics/, and have a look at the off-the-chart EPV (although not so much poleward). However, I do not see this as a major SSW (by definition) and everything points to a recovering but weaker circumpolar vortex mid-month onwards.

“Meanwhile, though, the vortex is being shunted off the pole by warming and big height rises firstly over Siberia then the Bering Sea, with exaggerated deformation which will see it extend far south across eastern North America and introduce cross-polar flow (which you can see here: http://www.tropicaltidbits.com/analysis/models/?model=gfs&region=nhem&pkg=Tz10&runtime=2016020412&fh=132&xpos=0&ypos=255).

“At 500hPa a very deep trough digs southwards east of the Mississippi as far as the Gulf of Mexico. GFS shows a -3 to -4 sigma anomaly over the Southeast with ECMWF similar but a little less deep: http://www.tropicaltidbits.com/analysis/models/?model=gfs&region=eus&pkg=z500a_sd&runtime=2016020412&fh=120&xpos=0&ypos=155

“That opens the door to Arctic air pouring far southwards, and there’ll be snow chances at least as far south as the Tennessee Valley. Incidentally there is a risk of another Nor’easter around Feb 9th-10th.

“Downstream a mid-Atlantic ridge could build rather strongly from the subtropical high towards Greenland with slowed zonal flow but most likely surface low pressure developments eastern Atlantic / near the British Isles.

“If the long wave pattern shifts a little eastwards then the increased meridionality *could* see LP progression pull in temporary subsequent N-NW flows for the UK – a more likely route to short-lived cold shots than via any high latitude blocking in the medium range.

“I think that elsewhere people have got hung up on the stratospheric warming and, as so often, drawn excitable conclusions. Cold impacts are more likely for the eastern U.S. than Europe with a displaced rather than a split vortex; and the circumpolar vortex was so strong first half of winter it was always going to take a lot to break it down fully. And sure enough, as noted there should be a recovery after this “attack”. You can see the vortex distortion and latterly the beginnings of recovery in this rather nice animation of 10hPa potential vorticity:

“And here are some 3D representations:

“GFS has occasionally pulled out a split vortex at various levels during the past week but doesn’t now.

“That’s not to say that a possible further warming (early final warming?) wouldn’t bring colder chances from the end of February into March.

“I was surprised to read recently that a well-known online forecaster had predicted significantly cold/blocked conditions for Europe in January via a major SSW. A bit premature, that.”

The coldest night in three years was recorded last month together with the first lying snow in January since 2013 – though you had to be up early on Sunday 17th to see it.

For anyone looking for ‘traditional’ winter weather it was pretty desperate stuff and seems a continuation of the mild winters of the past three years.

Apart from a mild final week much of the month was rather cold with a couple of sharp night frosts that affected many early daffodils that bloomed during the super mild December.

Sunshine was just above average. Over 54 hours were recorded, 108% of what we can expect to see during an average January.

So what has February got in store weatherwise? There is no sign of any longer term changes in the pattern of synoptics across the UK. All models continue to suggest a very volatile jet stream with resultant low pressure close to or across the UK for much of the first half of February.

This week westerly winds will remain strong with severe gales in the north in association with Storm Henry over the next 36 hours. The current mild and damp conditions in the south should be replaced with colder, showery air moving south later on Monday, lasting into Wednesday. On Thursday another large warm sector will move up across the UK from the SW returning mild and damp conditions.

At the weekend all models show low pressure areas taking a much more southerly route across the UK with gales and wet weather. While no cold weather looks likely there may be incidences of very heavy and thundery showers. Only GFS on Monday is showing any hint of more settled, colder weather at the end of the period.

A mean of about 5.9C, just over average, is the highest probability at 71%. Something ‘rather mild’ comes in at 29% probability.

Rainfall is looking low: 15mm represents something 38% of average.

Sunshine totals will be low and it could be a dull month, around 60 hours of sunshine, that’s just 82% of average.

1st: Bright after sunny, clear dawn before clouding over with light rain. Rain at midnight.
2nd: Cloudy start after early overnight rain. Rainy spells and blustery throughout the day.
3rd: Drizzle to start then damp before more rain moved in at 11.30am – this fell intermittently through the day and evening and was often heavy.
4th: Bright, damp start after overnight rain. Some light outbreaks up to 2pm.
5th: Sunny, clear and cold start with contrails dotting the sky. Clouding over later with rain after 6pm. Misty around midnight.
6th: Bright, very damp start. Mostly cloudy with rain in the evening and overnight.
7th: Dull start with outbreaks of rain spreading in, some heavy and very blustery. Drying up after lunchtime though feeling cold. Cool overnight with frost on cars with a very brief shower on school run.
8th: Bright start though light showers around. Gradually clouding over. Clearer spells overnight and cool.
9th: Bright start though with plenty of cloud around. Showers, some heavy with small hail at 8.30pm. Clear spells overnight.
10th: Bright start after overnight rain. Cloud gradually decreasing to leave it clear at noon. Cloud returned after dusk and thickened up around 9pm. Heavy rain from midnight.
11th: Cloudy, damp and cold start. Some breaks after noon then clear spells overnight and cold.
12th: Sunny, cold start. Clouding over at midday to leave cold-feeling afternoon and overnight – too much wind for a frost.
13th: Bright, cold start but turning mostly cloudy. Rain in the evening and on ride home.
14th: Rainy. cold start, then cloudy with sunny intervals. Cold air digging in from midday.
15th: Sunny all day with just a few cirrus. Took a while for frost to form properly.
16th: Sunny, frosty start with just a few cirrus. Variable cloud and evening in London felt freezing. Some drizzle, this turned heavier and by 4am thick flakes were falling to give a thin covering. Some 1cm at High Beach during a bike ride.
17th: Cloudy start. Thin covering of snow (<1cm) thawed by lunchtime. Cloud built into afternoon to leave chilly evening.
18th: Bright start but sunshine was weak so felt cold. Mostly clear into the evening allowed for an early frost. A classic radiative cooling night until the early hours, assisted by a very gentle low-level flow off the continent where there were some very low dew points. Between 2am and 6am there was some thin, high-level cloud that drifted across, which stopped the radiative cooling. Warmth from the ground then briefly lifted the temperature until, once more the cloud cleared after 6am and allowed the temperature to fall again to its minimum of -5C at 0809z. There was also a little mixing of the layers of air between 2 and 6 which would also have had a cooling effect. Had it not been for the cloud I’d suggest that the low could have fallen to -6.2C, which would have been the coldest since February 2012 when it fell to -9.2C over full snow cover.
19th: Sunny all day with occasional alto-cumulus drifting across. Another cold night, the coldest in 3 years.
20th: Bright start with lots of scattered cumulus. Sunnier early afternoon and less cold. Another frost quickly forming after dark.
21st: Frost lifting quickly then cloudy with limited brightness throughout the day.
22nd: Cloudy start with rain arriving at 9.05am. Bursts through the day until early afternoon. Some brief brightness in the late afternoon.
23rd: Sunny, cool start. Clouding over with rain in the evening. Very mild.
24th: Cloudy start after overnight rain. Mostly cloudy with odd spot of drizzle though bright.
25th: Sunny, clear start though cloud bubbled up at 11am to leave mostly cloudy afternoon. Clear spells overnight and chilly.
26th: Cloudy and increasingly gusty up to midday. Some rain in the evening.
27th: Cloudy, blustery start.
28th: Sunny all day with just a few clouds around noon.
29th: Cloudy and breezy with some drizzle in the wind early afternoon. Report of 101mph gust on Shetland from Storm Gertrude. Wind seemed to strengthen at midnight before rain arrived.
30th: Cloudy and damp start after overnight rain. Sky soon cleared to leave mostly sunny afternoon.
31st: Drizzle in morning as warm front moved in. 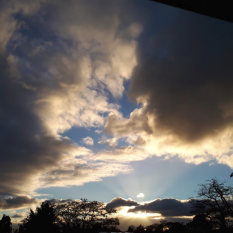