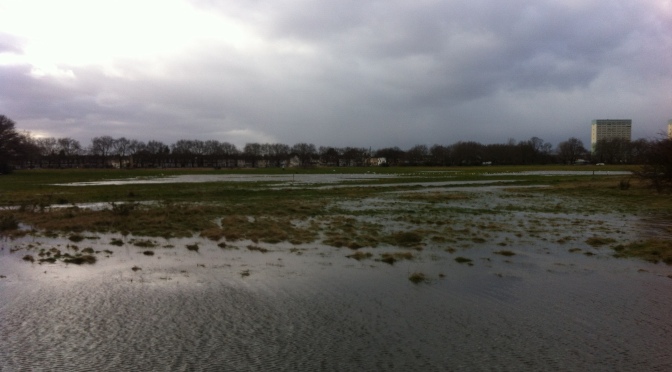 Floods in Somerset have, up to now, seemed far removed from our own back yard. But with thousands of homes by the upper parts of the River Thames now at risk of flooding I wondered how safe we were from our own rivers.

A look back through the reference books show the geography of the Roding and Lea Valleys has made the area prone to inundations for hundreds of years.

In January 1809 the lower River Lea burst its banks in several places following a deluge that dumped two inches of rain in the space of 24 hours. The rain abruptly ended a snowy cold spell that had begun over a month before in the middle of December. From Luke Howard’s readings it is likely that up to half a metre of snow had fallen in the previous weeks in the upper parts of the surrounding countryside with only slight thawing. With the frozen ground unable to absorb any of the rapidly melting snow and rainfall the amount of water flowing downstream must have been immense. Howard takes up the story…

“The River Lea continued rising the whole of the 26th… The various channels by which it intersects this part of the country were united in one current above a mile in width which flowed with great impetuosity and did much damage.”

Howard, his chemical factory located on the banks of the river Lea close to what is now Bow flyover, wrote at length about the event, his account replacing the usual brief notes about daily weather in his book The Climate of London.

He talks of embanked pasture land being “filled to the depth of eight or nine feet” and people driven to their upper rooms relieved by boats plying under the windows.

“The Thames was so full during this time that no tide was perceptible.” It took until February 23rd for things to return to normal.

Miraculously no lives were lost in the flood and cattle “by great exertions” were saved by being kept in their stalls. Howard, saying that the flood could have been far worse, believed a neap tide, strong westerly winds urging water down the Thames and mild weather helped avert a tragedy.

Howard’s statistics of the previous months show that the second half of 1808 were wetter than average – though not especially so. And nothing like the rainfall we have had this winter. From December 1st until February 8th Howard recorded 130mm of rain, which is about 100mm less than what I have recorded this winter.

This fact alone shows just how much the nature of the river has changed in the last 200-odd years thanks to spending on flood defences.

Work to improve the defences was prompted 67 years ago when similar catastrophic flooding came with the thaw that ended the severe winter of 1947, one of the coldest winters in recorded history and an episode remarkably similar to what Howard recorded in 1809.

The Lea Valley, along with many parts of the country, saw some of its worst flooding in a generation. The river burst its banks at several points bringing misery to surrounding communities. Valleys turned into lakes in 40 counties and East Anglia’s fens were a sandbagged inland sea. More than 100,000 properties were damaged and, then as now, heroic battles were fought by the military to keep water-pumping plants and power stations dry.

The sense of crisis was felt worldwide. Canada sent food parcels to stricken villages in Suffolk; the prime minister of Ontario even offered to help dish them out.

A marker of that flood, together with a history of flood defences, can be found here. There is also British Pathe footage of another flood between 1910 and 1919 here .

The River Lea Flood Relief Channel, that flows between Ware, Herts, and Stratford, took almost three decades to complete. The channel incorporates existing watercourses, lakes and new channels. Since it was completed in 1976, there have been no major flood events in the Lea Valley, although there have been three occasions when the river system was full virtually to its capacity: in 1987, 1993 and 2000. Since its completion, the level of protection afforded by the structure has declined, so that in some areas it offers 2 per cent protection, and in some, only 5 per cent protection. The Environment Agency published a strategic environmental assessment in 2008, which looked at ways to maintain the flood defences in the Lea Valley.

It remains to be seen whether we will see any flooding in Redbridge – a further 40mm of rain is forecast to fall up to Saturday morning. As well as the problem of rain there is also the issue of the water table which in the past week has risen to the surface in places. Inland lakes forming on Wanstead Flats have seen the cancellation of  football fixtures and a couple of people I’ve spoken to say standing water has started to appear in their cellars

It is all too easy to blame the Environment Agency for the current flooding in Somerset and elsewhere but the meticulous planning by its forerunners brought, at least to date, an end to the widespread flooding problem in the Lea Valley.

As the government struggles to find a solution to the current problems with flooding it would do well to look to the grand schemes of the past and forget about any planned cuts to flood defences. 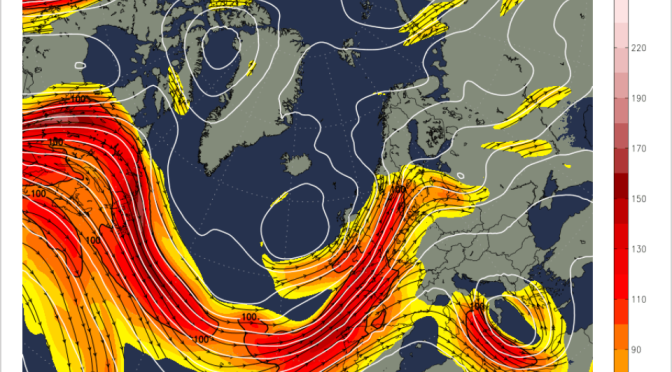 With flooding in the Somerset Levels dominating the headlines it is easy to get carried away with media hysteria that we are in unprecedented times in terms of rainfall. But as with so many media stories these days you don’t have to look far back in meteorological records to find that we’ve been here before.

Although I base this blog on local figures – two series of stats going back to 1881 and 1959 – it is notable that this particular microclimate has actually been dryer than neighbouring areas, including east Essex where the rain crossing this area often peters out. With such power in the jet stream, however, bands of rain have been pushing right through this winter. Surrey has also been notably wetter, with orographic uplift only partly responsible for the increased wetness. Anyone driving around the M25 will have noticed the flooded fields at the side of the motorway.

It has been mentioned that this winter has been the most cyclonic in recent memory, but you only have to go back to the winter of 2000-01 to find a more cyclonic winter, though that season saw fewer severe gales.

Since the beginning of the meteorological winter on December 1st Wanstead has recorded 235.6mm of rain to February 6th. Considering the 1959 series that’s 7% wetter than the winter of 1989/90 – though this winter is actually 0.9C colder than that season 24 years ago.

Looking at the bigger picture, and with 22 days to go, this winter is currently 7th wettest in the series going back to 1881 – quite a way behind 1915 which saw 343.7mm recorded. Looking at the GFS model out to 9 days, however, there is much more rain to come.

The season so far, in terms of temperature and rainfall, has been notable in that autumn did not really offer any hints as to how winter would unfold. At the beginning of December I would have put the probability of a winter such as we have had so far at 10%. Should the rain continue to fall while the temperature stays mild the probability would fall to 1% – a truly exceptional winter in the same league as 1962/63 – but at the other end of the scale.

After my less than impressive stab at a winter forecast I am a bit loathe to make any more predictions. Trying to predict the weather more than a few days ahead with any detail is impossible. And seasonal forecasting is fraught with difficulty. However, precedent suggests we could be in for a warm and settled March. Indeed, if this year is anything like what followed in 1990 we could be in for a very nice summer. But then again we might not. As Mark Twain said: ‘Climate is what we expect; weather is what we get’.

The last time January was so wet Eddie ‘The Eagle’ Edwards was about to fly the flag for Great Britain in the ski jump at the Winter Olympics in Calgary, Canada, in 1988.

Some 130.6mm of rain (251% of average) fell in January, beating the previous record set in 1988 by just 2.8mm around midnight on Saturday 1st. Unlike 1988, last month followed a December that was 154% wetter than average. The wet spell, which started on December 13th, is only now making a real impact on the river Roding which is now running very high.

January was also warmer than average with a mean temperature of 6.4C (1.5C above the 30-year average) – ranking it 20th in the series since 1881 – and the warmest January since 2008. Though the month was very mild no single day was particularly mild. Highest maximum was 12.7C on the 7th.

The most notable day was probably Saturday 25th when what started as a bright, fine day quickly changed around 4pm as a strong squall with heavy rain blew through with associated thunder and lightning and 6C fall in temperature in an hour. Wanstead escaped the damage of elsewhere. Numerous trees blocked rail lines in Kent and gusts of over 60mph were widely reported.

There were two other incidents of thunder and lightning on 5th and 6th – very unusual in the middle of winter and an average normally observed in high summer.

Air frosts: 5 : coldest night of winter so far was observed on morning of 12th with -2.9C