When it comes to explaining weather phenomena the British media has often been found wanting over recent years. But when the Australian Bureau of Meteorology yesterday confirmed the emergence of a fresh El Niño newspapers and TV stations inevitably reached the conclusion that the phenomena will trigger a severe winter in the UK.

Sky News told us that it “could also result in a harsh winter for the UK; during the last El Nino in 2009/10, Britain suffered heavy snowfall”, before showing us newsreels of what looked like conditions in December 2010 – the winter after.

Not to be outdone the Daily Telegraph moved the effects forward to this summer, telling us the effect *could* herald a “damp summer with temperatures well below average”.

I decided to have a look at the facts to see what the effect of an El Nino episode was by comparing the US weather agency NOAA’s data on ENSO episodes going back to 1950 with my own data. For speed I used my top ten snowy winters and compared against the NOAA data.  The results showed that eight cold winters followed an ENSO pattern that was negative. The winter of 2009-10 seems to be the exception to the rule. Indeed, a significant El Niño episode in 1997/98, preceded the third warmest winter in my series going back to 1797!

El Niño / ENSO is just one variable when it comes to forecasting a season ahead. Other variables to consider are AO, QBO, MJO and this is before SSWs, sudden volcanic eruptions and sunspot activity throw spanners in the works.

It is exasperating that both the Sky and Telegraph stories were copiously shared on social media – prompting the inevitable comments along the lines of: “They’re talking rubbish, they can’t forecast what that weather will be tomorrow!”

But rather than badly informed journalists it is the Met Office and other noble agencies who will share the blame if the story is incorrect.

There is no doubt that El Niño will disrupt the weather around the Pacific rim but, considering the data we have available, I don’t think it, alone, will be the reason Britain may experience a severe winter this year.

“There is an approximately 90% chance that El Niño will continue through Northern Hemisphere summer 2015, and a greater than 80% chance it will last through 2015.” 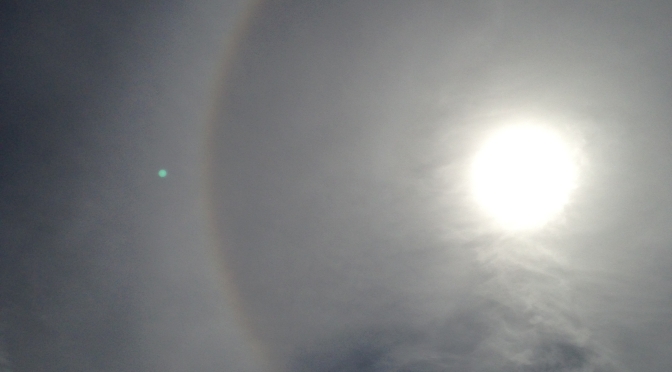 April showers bring spring flowers – or so the saying goes. The month was actually sunny and very dry with less than 50% of what falls in a normal month.

Indeed just one day, the 30th, was what you could say was a classic April day – a sunny, clear morning saw convection build towering cumulus clouds with a light shower around lunchtime.

There were 201 hours of sunshine recorded in this area which is 126% of what we can expect to see during an average April. The wettest day occurred on the 25th with 4.7mm. Air frosts: 5 Ground frosts: 13

So what has May got in store weatherwise? The models this morning (May 1st) suggest next days remain unchanged with troughs moving NE across the UK over the weekend introducing warmer air with a mix of sunshine and showers following. A new LP looks like developing over western France on Monday becoming absorbed in the main low to the west of the UK bringing a more sustained westerly feed ahead of rising pressure from the south later toward the weekend, bringing fine and summery conditions. The risk of rain should decrease as the week goes on.

Beyond that the outlook, as ever, is uncertain.

My long range method suggests the month will be average in terms of temperature: 80% probability. The next highest chance is for rather mild at 20% probability. Rainfall is looking average to slightly below average, though at only 60% probability. It looks like another sunny month is in prospect – 80% probability of sunshine at 1.2 times the mean.

So with a slightly changable start to the month we can look forward to another sunny, pleasant spring month without heatwaves?

My April outlook was good in that it ruled out any chance of a very mild or very cold month. The combined probability of 72% for an average to rather mild month was correct. I was, however, completely off with the rainfall, the signal for which was greater than average

1st: Bright start but very breezy through the morning and afternoon. Rain after 11pm and again at 3.30am.
2nd: Bright start though sunny spells increased through the day. Felt really pleasant out by noon. Some rain in the early hours before obs time.
3rd: Cloudy through the day with some rain late afternoon.
4th: Cloudy all day though with some drizzly rain. Some brightness was seen on way in to South Kensington in the Whitechapel area.
5th: Cloudy, cold start but with sunny spells developing through the day. Pleasant in the sun.
6th: Sunny start with cloud building from time to time. Cloud cleared overnight to give a ground frost.
7th: Sunny start with long clear periods through the day.
8th: Cloudy start gradually cleared to hazy sunshine. Cloudier again in afternoon.
9th: Cloudy start though soon brightening up for a sunny day in town.

10th: Cloudy start though cloud quickly thinned to leave sunny day. However, cloud was hazy at times with bad pollution seen over London. Also a few drops of rain were observed rain around edge of Ornamental Waters. Humid.
11th: Drizzle turned to moderate rain that was over in 45 minutes and cleared to sunny intervals, then longer sunny periods through the day. Much cooler than yesterday.
12th: Sunny start led to a day of long sunny spells. Sky was initially a deep blue but hazy cumulus built up after 4pm.
13th: Cloudy start, some brightness in the afternoon.
14th: Sunny, gin clear start. Sunny all day with light breeze taking edge off temp.
15th: Sunny, clear start for RMetS meeting. Slight breeze kept edge off temp. Some light clouds late afternoon. Cooling off quickly in early hours.
16th: Sunny spells in the morning.
17th: Sunny though long spells of cirrus gave a solar halo. Chilly in the wind.
18th: Sunny spells to start though cloud decreased to leave gin clear afternoon. Dew point dropped to 1.5C making it feel very chilly.
19th: Bright start but cloud quickly filled in leaving it feeling cold in the wind. Some sunshine after 5pm making it a pleasant if a bit cold in the wind evening.
20th: Sunny and mostly clear all day. Much warmer.
21st: Sunny and mostly clear all day. More contrails though. Chilly overnight again.
22nd: Sunny start though cloud filled in earlier than yesterday. Nowhere near as warm.
23rd: Cloudy start though the cloud decreased and was gin clear by 12.15pm.
24th: Sunny start although hazy at times. Cloud gradually increased late afternoon and light rain arrived 1am.
25th: Cloudy start though plenty of breaks in the cloud developed allowing for a pleasant afternoon.
26th: Slight drizzle to start then cloudy and cold all day. Cold overnight in clearer spells.
27th: Sunny start. Clouds bubbled up though the day with showers reported elsewhere. It threatened rain in Wanstead but stayed dry.
28th: Sunny start with just a few clouds through the day. Feeling cold though.
29th: Light rain to start though this suddenly cleared at 10.15am before clouding over again.
30th: Sunny start with clouds bubbling up. A light shower in Snaresbrook.