Two hundred years ago this December a huge part of the Weisshorn glacier in Switzerland crashed down several thousand feet to the valley below.

At 6am on December 27th 1819 the villagers of Randa, near Zermatt, were awoken as millions of tonnes of snow and ice swept away boulders, rocks, gravel and mature larch trees. Though the debris missed the village the force of the slide created a blast of air that moved entire buildings and their contents, burying 12 people, all but two of whom escaped with their lives.

Eyewitnesses described the noise of the falling mass as the loudest thunder and said a bright flash accompanied the slide before darkness once again enveloped the village.

First light revealed the utter devastation of the avalanche that have covered an area of pasture 2,400ft by 1,000ft by 150ft high.

It was not the first avalanche to bring disaster to Randa. In 1636 the village was destroyed by a similar avalanche when 36 people were killed. It is said that that occasion saw a much greater chunk of the flacier fall from the slopes of the mountain, at 14,783ft the 5th highest in the Alps.

Two other less serious falls happened in 1736 and 1786 but not precisely in the same place. This time only a small part of the glacier fell down.

Could a similar disaster happen again? With climate change and the nature of the Alps being constantly on the move it is possible. Earlier this month it was reported that part of a glacier on the Mont Blanc Massif, just 40 miles away as the crow flies, was on the brink of collapse.

I don’t have local figures but a look at the recent climatology in London shows that anomalies during the past couple of years – warmer than average summers and low rainfall – have been similar to what happened in 1819.

Of course the difference between now and 1819 is that we have early warning systems in place that can help prevent loss of human life in the event of a catastrophic avalanche.

Zermatt and the surrounding Valais area in Switzerland has a varied Alpine climate. But a study of weather data back to the beginning of 2011 reveals distinct seasonal patterns in terms of air pressure and precipitation.

Although these patterns can’t be relied on completely in terms of planning a wintersport or summer climbing trip awareness of the extremes can be a big help. Knowing when pressure is usually highest can help mountaineers pick that ideal week in summer to tackle 4,000m peaks. Similarly pinpointing weeks with lowest pressure and highest precipitation is the holy grail for those hunting for powder snow.

Pressure is lowest on February 2nd. Again this date often coincides when the deepest snowfalls often arrive after weeks of dry weather. Despite the unsettled pattern at this time annual precipitation is usually greatest at the end of October / beginning of November. I’ve lost count of the number of times the press interpret these early snowfalls to be a sign of a bumper season ahead only for the skies to clear at the end of November and, sometimes, the arrival of unseasonably warm weather.

The second wettest period is usually the end of April / beginning of May. Again, this past week has seen some parts of the Alps record the best snowfalls this season. 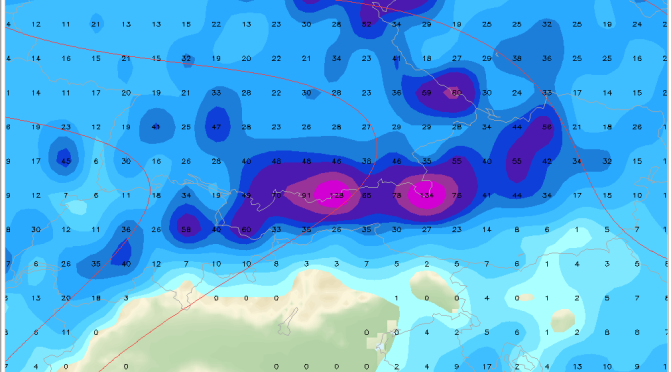 The Alpine snowfall season finished just below average in the Splügen area of the Swiss Alps. Abnormally warm weather after decent snowfalls in February and March curtailed the season; mean temperatures finished over a degree warmer than average between November and April.

The figures make depressing reading for anyone who enjoys winter sports and come after a study suggested that bare Alpine slopes could become a much more common sight in the future.

I first visited this area of the Alps in 1981, returning most February half-terms, apart from 1989 when the snows failed to arrive until after Easter. The season that hastened the installation of artificial snowmaking in resorts across Europe has always left me wondering just how much snowfall has varied.

Using San Bernardino, a village at 1636m in the southwest of Grisons canton, I had a look at temperature and rainfall data back to 1999 to see what patterns were present. The figures confirm that some years see metres fall while others have barely enough to cover the pistes. 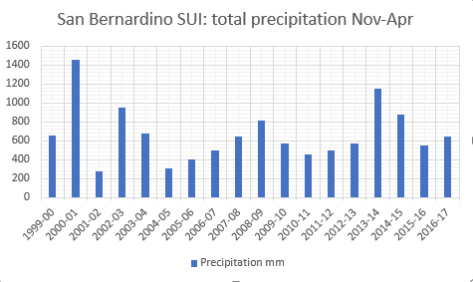 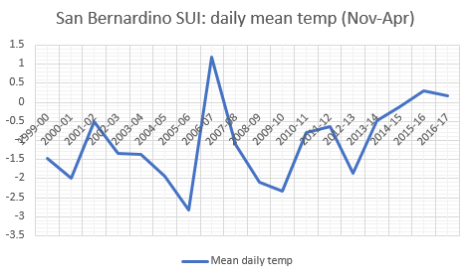 While the above graphs show typical variability they don’t reveal much about month to month conditions.

Closer scrutiny of the data shows that early season dumps of over 30cm, the kind that really get the snow bases going and keep the earth below chilled for a long season, are becoming rarer. Indeed, apart from a blip in 2013/14 there have been no big early season dumps since 2009/10. The seasons are taking much longer to get going.

As the second graph shows big dumps of snow are happening later in the season. If there is not already a decent snow base these snowfalls can thaw much faster because spring sunshine has already warmed the ground.

Another way of trying to find how the climate has changed is to look at how many ‘ice days’ there were in a given period – ice days are when the maximum temperature reaches -0.1C or lower over 24hrs.

The graph below shows the past three years have been fairly constant though this season’s total of 83 is 37 days fewer than the highest total in the series, 2005-06 which clocked up 119 days.

I’ve visited many resorts in the Alps which, obviously, will be affected differently by the changing climate – the range of microclimates in the Alps is staggering.

In conclusion, considering the data and my experience, I’d say that though the Alps have definitely warmed the variability and ebb and flow of the climate means it is impossible to say with confidence that by the end of this century the slopes won’t be covered in the white stuff.

I chose San Bernardino because it is fairly central in the entire Alpine range and is also the most local SYNOP station I can find to the Valtellina range that I have been visiting most years since 1981. Any climatologists reading this would point out that my data range does not stretch back the necessary 30 years to make a judgment on the stats. If anyone can point me to a site that offers data back to 1980 I would happily update my figures and graphs.

My trip this year to Madesimo, 8 miles as the crow flies from San Bernardino, was timed just right for a dump of snow in February that followed weeks of dry weather.

The area has enjoyed some epic snowfalls over the years including 2013/14 when many found themselves snowed-in following a 2m dump of snow.  The first of many snowfalls during what was an epic season. 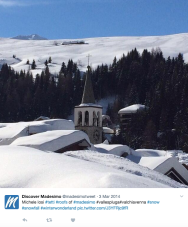