Will it be a white Christmas this year? It’s the question most forecasters get asked year after year as the big day looms less than a month away.

It always fascinates me why Christmas and snow are so closely associated with each other when the odds, especially in London, are so stacked against it happening.

Perhaps it is the Christmas card scenes of Dickensian winters that get people yearning for the white stuff. Indeed, the image of snow covered cobbled streets can probably be blamed on Charles Dickens. The backdrop of A Christmas Carol, and a host of other books, were written when winters, and Yuletide, were generally much colder than they are now. Perhaps it was also the cold Decembers, which came during notably cold years as he was coming of age, that sowed the seed of his impressions of life in London. The Central England Temperature (CET)  for December 1829 and 1830 were 1.4C and 1.8C respectively. To give you perspective the average mean temperature for the Wanstead region in December is 5.6C. Of course we had a taste of what a Dickensian December was like three years ago in 2010 when the average mean temperature was 1.5C. Though bear in mind the mean for 2010 was 10.5C – way above the 8.2C and 8.7C mean temps of 1829 and 1830!

But back to this Christmas… First of all, what do we mean by a white Christmas? The definition used most widely – notably by the bookies – is for a single snowflake, even if it lands in the midst of heavy rain, to be observed falling in the 24 hours of 25 December at a specified location recognised by the Met Office. Interestingly, the Met Office uses weather observations from Gravesend-Broadness, some 12 miles away, to show current conditions in Wanstead. A lot, however, could be said by us weather anoraks about the different microclimates between here and south of the Thames.

Technically, there has not been a white Christmas in Wanstead for over 30 years. In 2010, we could still see the Christmas card Victorian snow scene in small patches of our gardens, but these were leftovers of a previous dump, so it doesn’t count. Frustratingly, there has been snow on several Boxing Days in Wanstead (1995 and 1996) and in the weeks running up to Christmas, but not on Christmas day itself. The most typical Wanstead Christmas day weather is mild and dry, although it has rained on 12 of the last 33 Christmas days.

So why does it often snow either side of Christmas but not on the actual day? For Wanstead, Christmas is at the beginning of the period when it’s likely to snow. Looking at climate history, wintry weather is more likely between January and March than December. 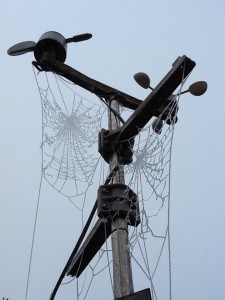 On average, snow or sleet falls in the UK 5 days in December, compared with 7.6 days in January, 6.8 days in February and 6 days in March. White Christmases were more frequent in the 18th and 19th centuries, even more so before the change of calendar in 1752, which effectively brought Christmas back by 12 days. Climate change has also brought higher average temperatures over land and sea and this generally reduces the chances of a white Christmas.

For snow to fall we need moisture in the atmosphere. Snowflakes start their lives as ice crystals thousands of feet up, and when these tiny ice crystals collide they stick together in clouds to become snowflakes. If enough ice crystals stick together, they’ll become heavy enough to fall to the ground.

It sounds a simple combination, but getting precipitation on the days when there are temperatures low enough for snow are few and far between.

Christmas day in Wanstead, on the balance of probability and from previous patterns, is most likely to be a green and mostly cloudy but dry one. Some brightness is possible with temperature peaking at around 10°C. You can read my full methodology on why I think this may happen here.

Though my attempt to find the probability of a White Christmas effectively rules one out, there is still an outside chance that one could happen.

At this time of year the UK can effectively become a battleground between cold polar continental air to the north or east and moisture-laden mild tropical maritime air to the south and west. Where these air masses meet, snow is possible, but a lot depends on which air mass wins the battle. When battleground situations occur, in one location it can be snowing, but just 20 miles or so down the road it can be raining. This is because there is a fine line between the boundary of the warm and cold air.

In years gone by, Wanstead and the surrounding area has often ended up in the cold air mass or the warm air mass. In these situations dry and mild or dry and cold weather is often the result. Of course, in a cold air mass situation there is always the chance of showery activity of the North Sea. The weather so far this winter has not been anything out of the ordinary, so I’m afraid there is nothing to suggest a white Christmas is likely.

If it does turn very cold on December 24, pray for clouds to appear and we could be in with a chance. But at the end of the day we still need that vital combination of temperature and moisture. Snow, like Christmas in that sense, requires some magic.