I normally headline these monthly reviews by referring to the most notable weather but this April, often a fairly non-descript mid-spring affair, offered pretty much every type of weather. 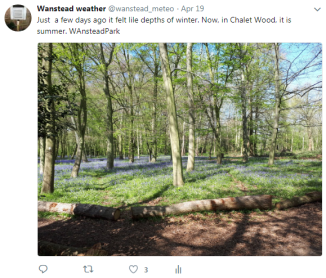 The mean temperature finished 11.7C, 1.9C above average and the warmest for four years.

Rainfall was 55mm, 129 per cent of average and the wettest for 6 years.

Hidden in the positive monthly anomaly was the warmest April day in a local record going back to 1959: 29.1C on the 19th – a figure that represents a positive anomaly of 15.5C and occurring at the start of the warmest April heatwave since 2011. It was remarkable that such an anomaly happened so close to a record negative anomaly the previous month.

Yet, just over a week later, temperatures lurched cold again with one of coldest last days of April on record. Though the 24hr record wasn’t broken the noon-6pm record going back 60 years was beaten.

The wettest day occurred on the 9th with 10mm falling. 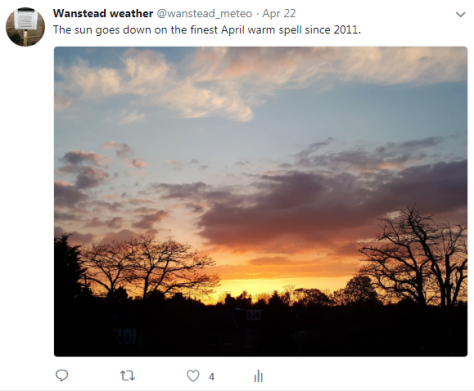