When it comes to explaining weather phenomena the British media has often been found wanting over recent years. But when the Australian Bureau of Meteorology yesterday confirmed the emergence of a fresh El Niño newspapers and TV stations inevitably reached the conclusion that the phenomena will trigger a severe winter in the UK.

Sky News told us that it “could also result in a harsh winter for the UK; during the last El Nino in 2009/10, Britain suffered heavy snowfall”, before showing us newsreels of what looked like conditions in December 2010 – the winter after.

Not to be outdone the Daily Telegraph moved the effects forward to this summer, telling us the effect *could* herald a “damp summer with temperatures well below average”.

I decided to have a look at the facts to see what the effect of an El Nino episode was by comparing the US weather agency NOAA’s data on ENSO episodes going back to 1950 with my own data. For speed I used my top ten snowy winters and compared against the NOAA data.  The results showed that eight cold winters followed an ENSO pattern that was negative. The winter of 2009-10 seems to be the exception to the rule. Indeed, a significant El Niño episode in 1997/98, preceded the third warmest winter in my series going back to 1797! 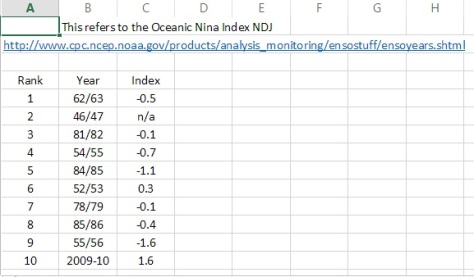 El Niño / ENSO is just one variable when it comes to forecasting a season ahead. Other variables to consider are AO, QBO, MJO and this is before SSWs, sudden volcanic eruptions and sunspot activity throw spanners in the works.

It is exasperating that both the Sky and Telegraph stories were copiously shared on social media – prompting the inevitable comments along the lines of: “They’re talking rubbish, they can’t forecast what that weather will be tomorrow!”

But rather than badly informed journalists it is the Met Office and other noble agencies who will share the blame if the story is incorrect.

There is no doubt that El Niño will disrupt the weather around the Pacific rim but, considering the data we have available, I don’t think it, alone, will be the reason Britain may experience a severe winter this year.

“There is an approximately 90% chance that El Niño will continue through Northern Hemisphere summer 2015, and a greater than 80% chance it will last through 2015.”