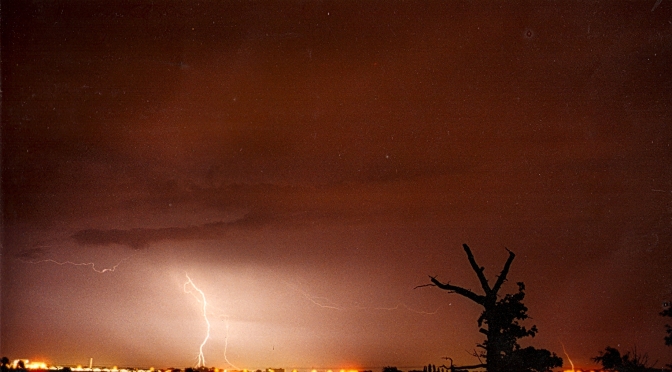 I’ve decided to cobble together a few lines on last night’s notable thunderstorms which reminded me so much of the stormy nights on the 1980s.

After writing off the risk of storms for our area last night I was awoken at 3am by loud, rumbling thunder – the kind that seems to resonate all around you. A quick look on the radar revealed quite a widespread thunderstorm, quite different from the smaller, more intense one that woke up most of Wanstead on July 23rd last year.

On viewing the live lightning map at 3.10am it became clear that this was no flash in the pan. Further rumbles and strikes had me leaping out of bed to monitor the station. EssexWeather reported 1809 lightning strikes in two hours for our region.

And on viewing the pressure graph the first storm saw a 6mb fall in pressure in a matter of minutes.

A second storm around 5.30am was less severe though still notable. The 9.4mm that the weather station recorded fell at a rate of 45mm/hr at 3am and 40mm/hr at 5.15am. Though the AWS is often out in heavy rainfall situations on this occasion it was more or less spot on – my 10am reading of my traditional 5″ raingauge revealed the official total to be 9.3mm. The rain took the July  total to 108% of the 1981-2010 mean.

And a squall that blew through just before 4am is well portrayed on this wind graph.

So, all in all, a really lively sticky night where the temperature didn’t fall below 18.2C. I didn’t manage to get any of  my own pictures but this one by @justinstokes on Twitter caught my eye.

According to the CAPE / lifted index further storms seem likely tonight. Indeed the situation across the Channel could be dire. It is probable a few will trundle their way across the sea to give us another sleepless night… 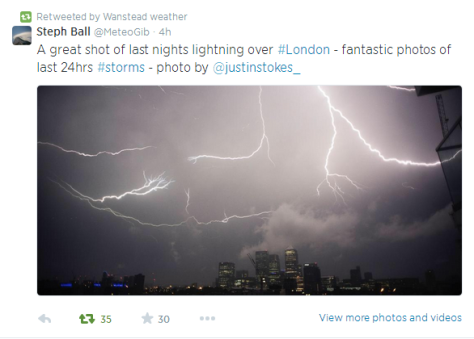