A thunderstorm on July 27th has ended a dry spell that lasted nearly 7 weeks in east London. As storms go it was a fairly tame affair, just 1.3mm fell, the first rain in 47 days, 20 hours and 14 mins.

There are many descriptions of drought but the one I am using here, for sheer simplicity of comparison back to 1871, is the definition used up until the 1990s; that is 15 consecutive days with less than 0.25mm (0.01 inches) rain on any one day.

Meteorological droughts occur in most years though obviously ones that occur in summer are far more noticeable than those in winter. Since 1871 there have been 35 calendar years where no drought has taken place.

The longest drought before this one in 2018, probably not surprising for those who remember it, occurred during the long hot summer of 1976. The fact that summer came on top of a very dry winter, rainfall that season was about a third of what was recorded here last winter, meant that water supplies were in a much worse state, with hosepipe bans common.

Other drought years to feature include 1959, which saw the 3rd sunniest summer on record, 1929 and 1995, a summer which saw one of the hottest heatwaves on record.

For the stats I’ve used local rainfall figures back to 1959 and then stats used at Kew to 1871.

Looking at the results more closely I’ve divided them into their meteorological seasons. 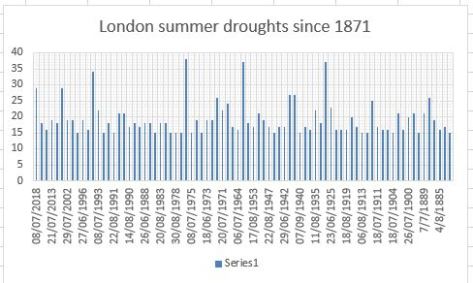