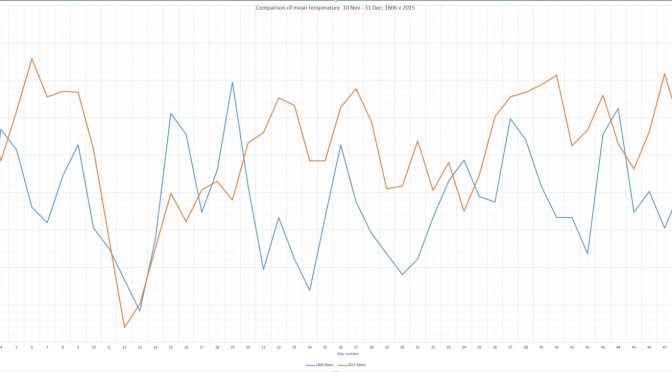 When I was writing up my winter forecast I came across an analogue that was very similar to what happened during the period November 10th to December 31st.

The results showed a close similarity between the two periods, November 10th – December 31st, though the mean in 2015 was some 3C warmer than 1806. Is this a question of synoptics or is this area now 3C warmer than it was just over 200 years ago?

Luke Howard, in his first volume of The Climate of London, describes a very warm December that followed on from a warm November that fooled flora and fauna into thinking spring had begun early.

“The catkins of the filberts expanded prematurely. On December 25th a hedge sparrow’s nest was taken at Doveridge, Derbyshire, with four eggs and near Warwick a green linnet’s with two eggs. It is worthy of remark that the heat was the same on December 24th as on June 24th last – on both those days the thermometer being nearly 60F.”

Howard goes on to describe how the south-west wind had “reigned for weeks” – for most of November and December before finally giving way at the turn of the year.

“The south west wind which had so long reigned yielded just at the close of the year to the north and west . Some frost ensued which, however, had not the characters of permanence being neither ushered in by driven snows nor accompanied with a dry and serene atmosphere.”

His description is not dissimilar from what is known as a “three-day toppler” cold spell where a dominant European high briefly gives way to cold air from the north-west or north, bringing often heavy snow to Scotland and the north but just a few cooler days in the south, before the cold feed is cut off as the high re-establishes itself.

“The effects of the late high winter temperature on vegetation must have been obvious to everyone who has seen the country. To the very close of the year the grass continued to grow, the daisies to enamel the turf and many of the inmates of our gardens native and exotic to thrive and blossom. Even hyacinth bulbs left in the open beds shot up and flowered. Ten years ago winter came on six weeks earlier and with considerable severity.”

Words that echo what’s going on this month, particularly in the south-west where I’ve heard reports of roses still in bloom and affected by greenfly whiles daffodils look like they will be out in a couple of days.

January and February 1807 were, by the standards of that time, roughly average.