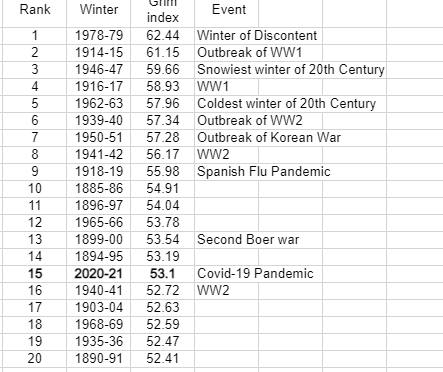 The last three months in east London, considering sunshine, have been the dullest for 10 years. Despite the sunny end to February just 123 hours of sun have been recorded, just under 74 per cent of the seasonal average.

With little sun, rainfall well above average, temperatures best described as average and the endless lockdown it is no wonder things felt so grim.

A couple of years ago, inspired by the blogger XMetman, I devised my own ‘grim index’ to try to rank how each winter ‘felt’.

Using the same criteria, and assuming that most people welcome sunshine, it can be seen that since the least grim winter of 2007-08, the season, after a blip in 2018-19, has been growing steadily worse.

The grimmest winter, considering statistics back to 1881, was, ironically, the 1978-79 ‘Winter of Discontent’ when, again ironically, ‘Sunny Jim’ Callaghan was in Downing Street as widespread strikes coincided with the coldest winter for 16 years.

On looking at the Top 20 of grim winters it is striking how most coincide with depressing world events, the Great War, World War 2 and the Spanish Flu pandemic.