Recent model output that has many bullishly predicting a cold spell in February reminds me of the winter of 2008 when the likes of the GFS and ECMWF models kept teasing us that a Scandinavian high pressure was imminent.

This rare pattern brings the south-east its coldest weather in winter, in the past bringing the January 1987 and February 1991 cold spells.

A look back at the pressure patterns in 2008 show that high pressure was in the ‘right place’ between the 11th and 16th but, just as -10C uppers looked poised to flood across from eastern Europe, the high pressure collapsed south, leaving the UK in a SE’ly flow off a mild France.

There was snow in 2008 but it didn’t arrive until the spring, in late March and, the best fall, in early April when I remember waking up on the 6th to a 5cm covering that mostly melted by lunchtime.

I suppose the one silver lining for any coldies reading this is that February 2008 was the sunniest on record.

The maps below show the sea surface temperature anomalies. A slight La Nina on both. ENSO, considering my winter forecast, has been the best guide for how this winter has so-far panned out – front loaded. 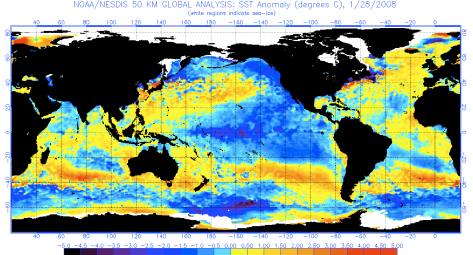 * The focus of these blogs is usually on what the weather was, or may be, like in my backyard – though they usually broadly apply to anywhere in the south-east that is close to sea level.

One thought on “The ‘nearly cold spell’ of February 2008”