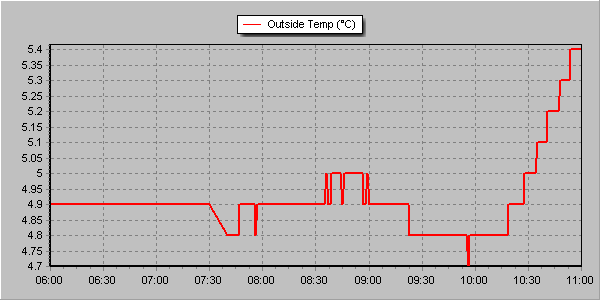 While heavy low cloud obscured the partial eclipse in this area there were a couple of interesting factors that I observed.

At 9.45am, shortly after the maximum obscuration of the solar disc the air pressure suddenly dropped. This coincided with sudden relief to my blocked nasal passages, symptoms of which appeared last night. Eighteen minutes later the fall in air pressure became less steep and the nasal symptoms returned.

As the light began to fade it seemed to turn colder though, on looking at the actual figures, the effect of the partial eclipse through heavy cloud was a depression in temperature of 0.3C. I worked this out by comparing today with yesterday which had almost identical weather conditions. People remarked that it turned noticeably colder though perhaps this was more caused by standing out in temperatures of 4.9C for a long period.

Like the eclipse in 1999 I noticed that the birdsong quietened somewhat though there was not the same crescendo of noise that you normally get at dusk when birds roost.