November 1940 was the wettest on record for this area. Over 170mm of rain fell in Greenwich, beating the previous record set over a hundred years before in 1836.

Other areas of London were even wetter: Croydon was wettest with just under 196mm while Addington recorded just under 194mm, Bromley 179mm and Regent’s Park 175mm.

In Wanstead and Woodford the inclement weather coincided with a 6-day pause in bombing incidents during the Blitz. November was a very cyclonic month that probably hampered German air operations.

Another 6-day pause in the bombing happened after November 16th. When the Luftwaffe returned on Saturday, November 23rd, it was Wanstead that bore the brunt. At 4.12pm, as light was fading on a dull, dreary afternoon, high explosive bombs caused fires at and partly demolished nos 78 and 89 New Wanstead. A minute later another bomb ruptured water and gas mains in Spratt Hall Road. At 4.30pm a further high explosive bomb fell in the High Street, killing 4 people. The raid ended at 5.16pm as a bomb fell in Fitzgerald Road though this time there were no injuries.

By now the weather was beginning to quieten down though weeks of deep depressions with associated gales and heavy rain had taken their toll – many residents reported problems of Anderson bomb shelters being constantly flooded – but it was probably the design as much as the weather that was to blame.

As pressure built in the last few days of November the first frosts of winter arrived but the bombs returned. High explosive devices fell in Woodford New Road and Bunces Lane on the 30th, fracturing a water main.

To put November 1940 into some sort of perspective the average fall for the month in this area, with regard to the 1981-2010 average, is 59mm. The closest this area has come to matching the record was 2009 when 150mm was recorded and preceded a cold winter.

The following synoptic charts are for each day of November at 7am. All courtesy of the Met Office 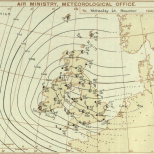 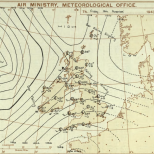 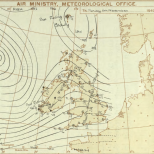 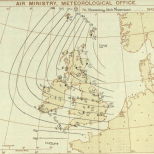 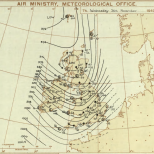 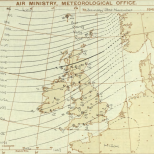 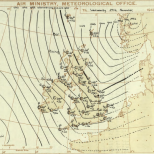 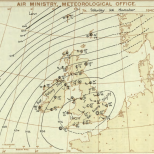