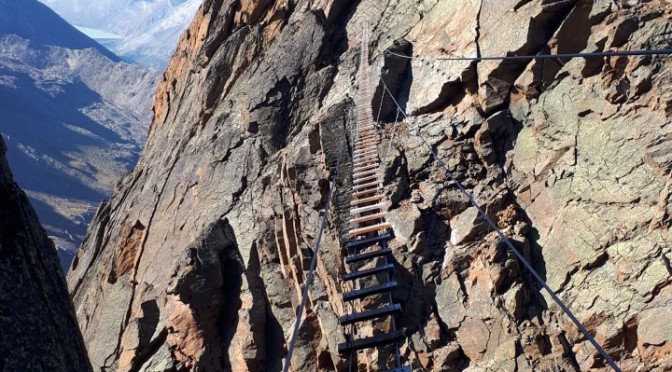 Four months on from an amazing ski tour I was back in the Swiss Alps in August, this time for a week of mountaineering and rock climbing.

The (mostly) white wonderland of April had transformed into the deep green of summer in the valley, the temperature on my arrival in Visp was a hot 30C. Waiting patiently was my guide, Davide, and we were soon on our way to the cooler climes of Saas Grund, little sister to Saas Fee – though with scenery as, if not more, spectacular.

Mountain sickness saw me abandon any attempt of climbing the Weissmeis. Though sleeping at the the Hohsaas hut was intended to help me acclimatize to the altitude I think the 3,100m elevation was simply too much for my system to handle. It is hard to put into words the symptoms; imagine your worst-ever hangover and multiply it by five.

Anyone can get sudden altitude sickness, even top athletes. After an awful night I was ready to descend back to Saas Grund but was soon sent back to bed with a painkiller. Two hours later I was just about fit to set off and was soon descending down the valley to climb the 3,200m Jegihorn in the far distance. I felt a pang of disappointment as I glanced over my shoulder at the magnificent Weissmeis; the purpose of the week was to get as much glacier mountaineering as possible.

As we traversed over the scree and across gurgling streams however, the beauty made me forget my disappointment. The sheer magnificence of the Jegihorn soon became apparent, too. It reminded me of Tryfan in Snowdonia, only this was three times the size.

The route up soon forked – it was either the ‘easy’ way up or via ferrata, a series of steep drop offs, grab handles, steps and precarious looking ladders allowing access up sheer cliffs. After a couple of hours progress to the peak proper becomes a choice of climbing down and up or this suspension bridge that is like something out of the film Cliffhanger.

After the bridge it is a further scramble up steep ledges and narrow gullies for the remaining couple of hundred metres to the summit.

With every summit comes a descent, the part I always find the hardest because of the strain on the knees. But the trek back to the bottom of the Hohsaas cableway presented plenty of scenery.