The unearthing of an ancient Egyptian statue, initially thought to be of the pharaoh Ramses II, in a Cairo suburb earlier this month reminded me of the mysterious stone that was discovered in Wanstead Park in 2014.

The granite object, discovered partly buried in undergrowth on the banks of Heronry Pond, was initially thought to be part of the long-lost pyramidion (or capstone) of Tia, overseer of the treasury in the time of Ramses II, from his tomb at Saqqara in the Aswan region.

Though tests made last year at Reading University suggested otherwise the fate of the stone that once had pride of place in the American garden of Wanstead House remains a mystery.

The capstone was placed in the park as part of a landscaping project in 1784. Humphry Repton, the landscape gardener who devised plans in 1813-18, described Wanstead Park as “one of the most magnificent places in this country”.

Unfortunately, owner William Wellesley Pole’s debts caught up with him and the estate’s riches were sold off at auction, including the intriguing stone which was labelled Lot 279.

The auction on June 10th coincided with the hottest day of 1822 with the temperature peaking at 92°F. Evening thunderstorms brought some relief but the capstone remained unsold.

A catalogue of the 30-day event showed that Lot 279 was the last item to be sold, being bought by the auctioneer himself who immediately gave it to his son-in-law to display in his garden at Tamworth Castle. There is no evidence, however, that the stone ever reached Tamworth.

Though rainfall during the summer of 1822 was average much of it fell in cloudbursts. Luke Howard’s records in nearby Stratford for June and July reveal many days with maxima well into the 80s and destructive thunderstorms with deadly lightning and hail, some of which measured three inches in diameter.

It is possible that faced with transporting a very heavy lump of granite some 135 miles on a horse drawn cart on unmade, waterlogged roads those charged with the task instead quietly slid the stone into one of Wanstead Park’s lakes.

Ralph Potter, a member of Friends of Wanstead Parklands, has been following the story of the stone since it was discovered. He explained the reason behind why he thinks the stone’s origin is inconclusive: “Probably the world’s most eminent authority on stone from the Aswan quarries has declared, based on photos alone, that the stone does not originate from Aswan. On the other hand we have an eminent petrologist who within minutes of seeing the stone declared it almost certainly came from the quarry complex at Aswan.”

*A full history of the mystery of Lot 279, written by Chris Elliott, can be found here

**A chronicle of Wanstead Park, written by Alan Cornish, can be found here.

***The statue pulled from the mud in a Cairo suburb is thought to be most likely the first king of the 26th Dynasty of Egypt — Psamtek I . 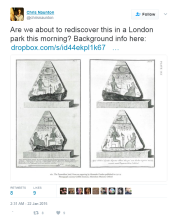