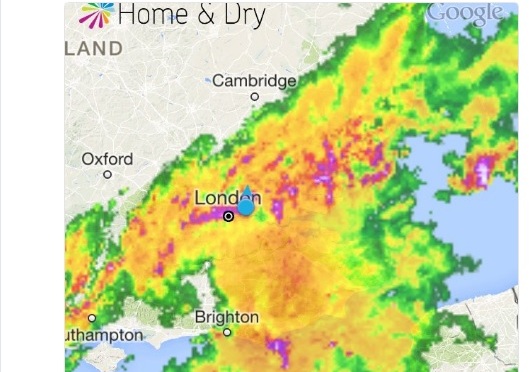 The past week has produced the highest 24-hour rainfall total recorded in Wanstead since at least 1960. The multi-cell thunderstorm on Wednesday night saw 60.8mm fall, most of it in two hours, bringing flash floods to the surrounding area. The spectacular lightning and thunder that accompanied it was almost a side show such was the intensity of the rainfall.

I was unfortunate enough to be riding home right in the middle of the event: the entire length of the Mile End Road bore a resemblance to a shallow river, the heavy rainfall bouncing back off the Tarmac high enough to create what felt like a powerful drench shower.

The legacy of the downpours caused chaos in the morning and evening rush-hours. Many commuters were stranded at London terminals including Waterloo station because of flooded tracks, possibly robbing many of the chance of voting in the EU referendum. It will never be known if this would have had a bearing on the final result.

Many people think of June as a warm, summery month. The term Flaming June  is regarded in most peoples’ subconscious as a reference to past weather. That it is a actually the name of a painting is often missed. Looking back through our local history there has been many notable events of thunderstorms and prolonged rainfall. In 1903 a record-breaking 59-hour deluge left vast swaths of the borough inundated.

This weekend 200 years ago, during the Year Without a Summer, a powerful tornado, strong enough to carry away objects weighing 60lbs, tore through the Edgware Road area in west London. Luke Howard recorded the event in the Climate of London.

At two o’clock being a still sultry day a whirlwind passed over the nursery ground of Mr Henderson in the Edgware Road which lifted seven lights from the greenhouses and carried them to the height of the highest elm trees, each of the lights weighs 50 or 60lbs at least. At the same time two garden mats were carried to an immense height so that the eye could not distinguish them.

The following day “extremely heavy and prolonged rain from 9am (26th) to 9am on 27th gave 2.95 inches”. This total of over 52mm is notably high though not a record.

This weather was a continuation of what had been an awful May and June – cold with more than twice the average rainfall in June.

The weather then was not unlike what we have experienced this month. Indeed, a look at the weather throughout this year was similar as this graph shows.

Though the mean temperature at times bears a close resemblance this year is no comparison to 1816: The mean then was running at 6.2C, over 3 degrees colder than today.
Mean pressure was also lower being 992.1mb; the 2016 mean 9am pressure is 1010.6mb.
Perhaps not surprisingly this year’s rainfall 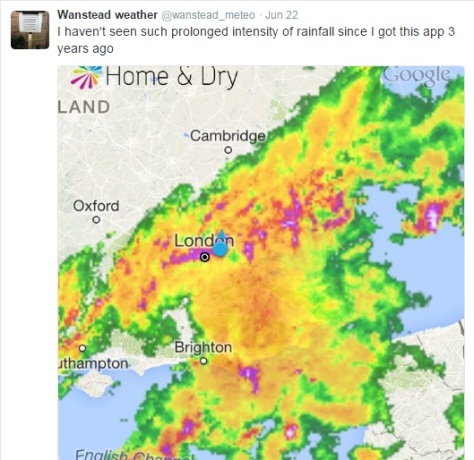 The dreary summer and frequent thunderstorms of 1816 inspired Mary Shelley to write Frankenstein. A summer vacation in Switzerland led her to spend much of the time indoors. She, along with Lord Byron and John William Polidori entertained each other with a contest to write the scariest story of all. The unseasonal conditions, along with this dare, led to the creation of Shelley’s Frankenstein: The Modern Prometheus— as well as Polidori’s novella The Vampyre and Byron’s long-form poem, The Darkness.

It will be interesting to see if this June’s weather, along with momentous political changes here and in Europe, produce more fine fiction from the this and the next generation of writers.

2 thoughts on “June weather can be flaming horror show” 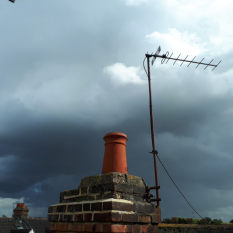