With the arrival of spring the people of Wanstead and the surrounding region must have thought that the terror of bombs raining down was at an end. Just one raid in February that damaged a few houses was in sharp contrast to the devastation wrought by the Luftwaffe since September.

But further horror lay in wait in March when four members of the Civil Defence Services, two of them young lads, would lose their lives while heroically carrying out their civic duties.

March continued the theme of the wet, miserable and dull winter. The early part of the month was unsettled with heavy rain at times. On the 6th, over 13mm fell. During the second week it became dry with sunny periods. There were some frosty nights and lingering fog. On the 12th, the maximum temperature was only 5°C. Temperatures slowly rose during the third week.

The morning of the 19th dawned cold and frosty. Patchy fog soon lifted under the warm spring sun – it was the second day running the region was bathed in over five hours of sunshine.

The fog soon returned after dusk but plummeting temperatures were no excuse for the wardens at Post 41 ‘F’ District to undertake their nightly duties from their Aldersbrook Tennis Club headquarters. This area of south Wanstead received a real battering from the early days of the Blitz, earning the nicknames “The Battle Field” or “Hell Fire Corner”.

The following impression of that night is written by one who was at the scene:

“The wail of the siren opposite the Post announced at 8.15pm the arrival of the raiders. The Post personnel saw a startling sight. The Flats were a sea of flame. Thousands of incendiaries were burning on the open space. The guns roared. It was obvious that the enemy was making a concerted and determined attack. Bomb flashes stabbed the blackout. Planes droned overhead. The batteries on the Flats joined those further away in putting up a terrific barrage.

At 8.50pm, three high explosive bombs fell in Lake House Road, damaging a number of houses and partly demolishing Nos 14 and 31. A few casualties resulted, one being a man who was trapped in the doorway of No. 14. Wardens heaved on the obstruction to release him. Gas escaping in the same house caused a fire. This was quickly dealt with and the flames smothered. A nearby barrage balloon had burst into flames, illuminating the scene with glaring brilliance and revealing the widespread damage. 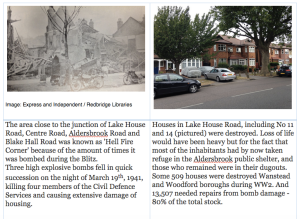 At 9.20pm this first incident appeared closed, and services were awaiting the result of a final search and check-up before being dismissed. Then a parachute mine landed. It exploded a few yards from Aldersbrook corner on the Leytonstone side. A house in Lake House Road, already badly damaged, tottered to destruction. Number 11 caught fire and was destroyed. Loss of life would have been heavy but for the fact that most of the inhabitants had by now taken refuge in the Aldersbrook public shelter, and those who remained were in their dugouts.

The attack died down. Wardens returned to their posts – but the number for 41 was sadly lacking. The two boys’ bicycles stood in their usual place. ‘Busy somewhere’ said the chief. But the absent ones did not return, and a search was made. They were found – in the mortuary, three of them. It was known that two others had been taken to hospital. Warden Barnett was one of these. He died next morning of his injuries.

Just before the mine exploded, the messengers had been giving assistance in one of the less badly-damaged houses. Broome, although officially not on duty, had rushed out to lend a hand. Warden Hutton was endeavouring to turn off the gas at No 14 when the mine fell.

So the four from Post 41 died doing their duty on the Home Front. The two boys, pals in the service, sleep in one grave in Old Wanstead churchyard. The two men lie close by, in Ilford Cemetery.

A few days later their comrades stood silently at attention as the funeral cortege halted outside the Post. A Union Jack covered each of the four coffins.

As spring wore on the weather remained mostly miserable though raid incidents lessened and petered out in May. Wanstead and Woodford had its last bombs of the period on May 10th.

In total 129 people lost their lives and 194 were injured during the campaign. This figure would nearly double when the next phase of the bombing, using V1 flying bombs and V2 rockets, would begin three years later in June 1944.

It is hard to imagine how people coped with the constant barrage of bombs during the Blitz. What seems to get lost in articles and historical texts I’ve read is just how grim the weather was at the time – remember this was a time before central heating. Not only were bedrooms freezing cold people must have laid there wondering if they were going to see morning.

It seems to be a human condition that when we are faced with adversity we just find a way of ‘getting on with it’ as best we can.