Over the next two weeks speculation on Christmas Day weather will inevitably build. Will Christmas be white or green? 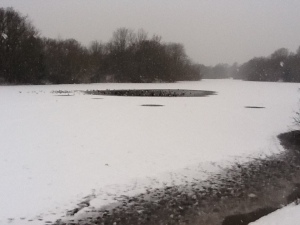 At this range it is impossible to tell from standard meteorological models though from the 15th, 10 days before the big day and when models can start to be relied upon for at least a general trend, the pieces of the weather jigsaw will start to fall into place.

Latest odds offered by bookies William Hill for a single snowflake at London Heathrow are currently 5-1, slightly shorter than I’d expect at this time of year. With the predominance of the European high I’d expect those odds to start to lengthen.

In terms of proper snow falling and settling, there has not been a white Christmas in Wanstead for over 30 years. In 2010, we could still see the Christmas card Victorian snow scene in small patches if our gardens, but these were leftovers of a previous dump, so it doesn’t count. There has been snow on several Boxing Days in Wanstead (1995 and 1996) and in the weeks running up to Christmas, but not on Christmas day itself. The most typical Wanstead Christmas day weather is mild and dry, although it has rained on 13 of the last 34 Christmas days.

In an earlier blog I had a look at what the last 170 or so Christmas Days in London were like weatherwise and found that snow actually falling on the day is extremely rare. Since 1840 there have been just 19 occasions of snow or sleet falling on the capital on Christmas Day which equates to a probability of just under 11%. If you consider that the last ‘white Christmas’ (see note) was in 1996,  then we are well overdue one.

But the weather doesn’t adhere to human created calendars and behave like it should on any given day. But patterns in any given year can sometimes repeat though correctly predicting they will happen is more down to luck. Nevertheless I’ve had another look at my calculations for this winter and see if there is any way I can make a prediction for Christmas Day.

I firstly had a look at Christmas Day stats overall since 1840. The most common group of maxima in the series is 8.1C and above. This occurred 70 times or 40%. I then had a look at the years that most closely follow this October and November. Ten years were on the list – two saw a white Christmas: 1938 and 1968. Snow often falls before and after Christmas.

So my guess for the weather on Christmas Day this year is for a maximum temperature of 7C after an overnight low of around 1C. With a 60% chance of rain in a stiff westerly wind there is a chance of something sleety falling.

But the fact that 20 per cent of the years in the above series saw a ‘white’ Christmas suggests that, unlike last year which I called right, there is at least *some* chance of snow falling. If you insist on having a flutter, however, Liverpool airport at 5-1 looks most generous.

* The definition of a white Christmas used most widely – notably by the bookies – is for a single snowflake, even if it lands in the midst of heavy rain, to be observed falling in the 24 hours of 25 December at a specified location recognised by the Met Office.

** On average, snow or sleet falls in the UK 5 days in December, compared with 7.6 days in January, 6.8 days in February and 6 days in March. White Christmases were more frequent in the 18th and 19th centuries, even more so before the change of calendar in 1752, which effectively brought Christmas back by 12 days. Climate change has also brought higher average temperatures over land and sea and this generally reduces the chances of a white Christmas.